Keccak is defined solely of operations on bits. When implemented on a typical computer, the input and output bits must be packed in bytes following a well-defined convention. In the case of Keccak, the convention is the little-endian convention, i.e., the first bit goes to the least significant bit position of a byte.

In more details, a n-bit string consists of a sequence of bits numbered from 0 (the first bit of the string) to n-1 (the last bit of the string). When packed into a byte or a word of n bits or less, bit number i goes to the position representing the coefficient of 2i in the byte's or the word's integer value. Conversely, a byte (or in general, a word of n bits) represents a string of bits numbered from 0 (the least significant bit, coefficient of 20) to n-1 (the most significant bit, coefficient of 2n-1).

Let us now reinterpret this block as bytes, as it would typically be stored. In the figure below, we can see the two letters encoded in ASCII, the delimited suffix d=0x1F for SHAKE128, a bunch of bytes 0x00 and finally the last byte 0x80. 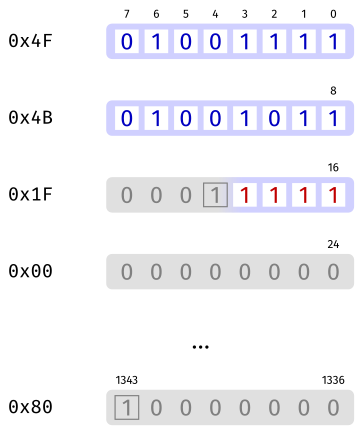